Wheeling Park (Back to Top) 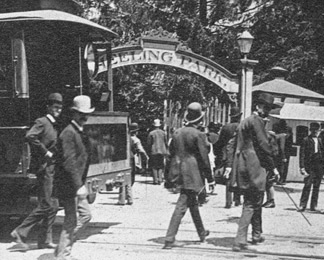 Wheeling Park existed before the turn of the 20th century and was privately owned by English immigrant Thomas Hornbrook. It was an estate so beautiful that people came from miles around to walk the grounds. After Hornbrook’s death, Wheeling Park was owned and operated by the Reymann Brewing Company. It was patterned after the colorful German beer gardens with arcades, amusement rides, games, holiday celebrations, a swimming pool and casino. World War I and the pending shadow of prohibition led to the closing of the park in the late teens. Soon after, Wheeling Park was deserted and run-down. City officials had high hopes of raising funds to purchase the park for public use, but their first attempt in 1923 was not successful. Otto Schenk, president of the Chamber of Commerce, refused to let the issue die.

In December 1924, two Wheeling businessmen, Charles Sonneborn and Louis Haller, took an option on the property with the intent of subdividing it. First, however, they offered to give the park to the public if $350,000 could be raised to buy and equip the park and if it would be placed under non-political management. The plan was announced in the newspapers and the public was given two weeks to raise the funds. W.E. Stone, prominent businessman-philanthropist, offered to give the first $100,000 and his offer drew in other substantial gifts (including one from Earl W. Oglebay of Cleveland). By 7:30 p.m. on Christmas Eve, more than 170 pledges assured that the goal had been reached. In its headline on December 25, the Wheeling Intelligencer proclaimed, “Wheeling Park is a Christmas Gift to the Wheeling Public.”

Oglebay Park (Back to Top)

The Oglebay story begins with Earl W. Oglebay, an Ohio Valley native and Cleveland industrialist who made his fortune in shipping on the Great Lakes in the 19th century. He received the honorary title of Colonel from President Hoover for his efforts in food distribution during WWI. In 1901, he purchased the 25-acre Waddington Farm from his mother-in-law’s estate and over the next quarter century, Colonel Oglebay poured his heart, knowledge and money into the development of this farm as an agricultural laboratory to benefit West Virginia farmers. Oglebay worked hard to improve the quality of life for rural families. He arranged for the first agriculture extension agent to come to the county and supported development of 4-H Clubs. He believed passionately in the value of education and was generous in his support of West Virginia University and his alma mater, Bethany College.

When Oglebay died in 1926, he left his beloved country estate to the people of Wheeling and vicinity for “so long as it shall be used for purposes of public recreation.” Under the terms of the will, the city was to accept or reject the bequest within three years. For almost two years, the decision was delayed, although a small staff of “borrowed” Extension workers from WVU moved in and initiated grass roots, seasonal recreation programs utilizing dozens of local volunteers. Meanwhile, park commissioners and city fathers met often to figure out a way to finance another park.

Finally, in July 1928, after overwhelming positive public response encouraged by H.C. Ogden, influential owner of the local newspaper, Waddington Farm was accepted by the Wheeling Park Commission as Oglebay Park. The final hurdle was resolved when Oglebay’s daughter, Sarita Burton Russel, offered funds to maintain the property during its first year of public operation. These three words – City Accepts Waddington – formed the banner headline in the Wheeling Intelligencer on July 28, 1928.

History of Philanthropy (Back to Top)

“Philanthropy has played an important part in building a park system that is admired throughout the country. You play an important part in that experience. The development of Oglebay and Wheeling Park is a story of philanthropy,” says Randy Worls, Foundation chairman. “From the very beginning, millions of private dollars have been contributed to finance the improvements that have been made throughout the years.”

The Parks System Trust Fund was established in 1945 to raise money for capital growth. Most of the facilities and improvements from the mid-1940s through the mid-1970s, including several sections of Wilson Lodge, were made through gifts to the trust fund. It is gratifying to park officials that support from many families has continued down through several generations.

Wheeling’s parks have been successful in obtaining federal, state and foundation grants because of the local funds and gifts of land available as a match. For this reason, when the innovative Land and Water Conservation Fund was established through the Bureau of Outdoor Recreation in the mid-1960s, three of the first four grants were awarded to the Wheeling Park Commission.

The operation of the Wheeling Park Commission will continue to remain a tremendous challenge each year. The operation of Wheeling Park and Oglebay and the generation of revenues from a wide variety of facilities will not be enough to sustain the parks in the future. This means the use of The Oglebay Foundation to aid the Park Commission in raising money for operations, development and endowment is vitally important in keeping our parks for everyone forever.