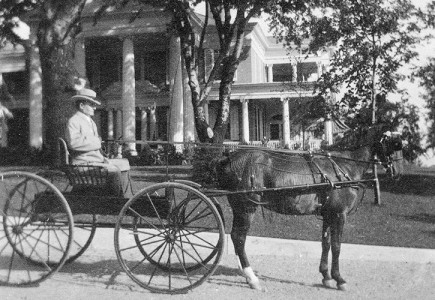 The Oglebay story begins with Earl W. Oglebay, an Ohio Valley native and Cleveland industrialist who made his fortune in shipping on the Great Lakes in the 19th century. He received the honorary title of Colonel from President Hoover for his efforts in food distribution during WWI. In 1901, he purchased the 25-acre Waddington Farm from his mother-in-law’s estate and over the next quarter century, Colonel Oglebay poured his heart, knowledge and money into the development of this farm as an agricultural laboratory to benefit West Virginia farmers. Oglebay worked hard to improve the quality of life for rural families. He arranged for the first agriculture extension agent to come to the county and supported development of 4-H Clubs. He believed passionately in the value of education and was generous in his support of West Virginia University and his alma mater, Bethany College.

When Oglebay died in 1926, he left his beloved country estate to the people of Wheeling and vicinity for “so long as it shall be used for purposes of public recreation.” Under the terms of the will, the city was to accept or reject the bequest within three years. For almost two years, the decision was delayed, although a small staff of “borrowed” Extension workers from WVU moved in and initiated grass roots, seasonal recreation programs utilizing dozens of local volunteers. Meanwhile, park commissioners and city fathers met often to figure out a way to finance another park.

Finally, in July 1928, after overwhelming positive public response encouraged by H.C. Ogden, influential owner of the local newspaper, Waddington Farm was accepted by the Wheeling Park Commission as Oglebay Park. The final hurdle was resolved when Oglebay’s daughter, Sarita Burton Russel, offered funds to maintain the property during its first year of public operation. These three words – City Accepts Waddington – formed the banner headline in the Wheeling Intelligencer on July 28, 1928.